Due to concerns about the increasing spread of Coronvirus and possible changing government guidelines next week, the next WI meeting and speaker ,on Tuesday 17th March, has been cancelled.

For the above reasons, the annual WI quiz on Friday 20th March has also been cancelled.

Sorry for any inconvenience caused

Details of the next meeting will follow in due course

Hope you are all keeping well and safe
Thought you might like this poem that was sent to me
It was written in 1869 by Kathleen O'Meara - enjoy
And people stayed at home
And read books
And listened
And did exercises
And made art and played
And learned new ways of being
And stopped and listened
More deeply
Someone meditated, someone prayed
Someone met their shadow
And people began to think differently
And people healed.
And in the absence of people who
Lived in ignorant ways
Dangerous, meaningless and heartless,
The earth also began to heal
And when the danger ended and
People found themselves
They grieved for the dead
And made new choices
And dreamed of new visions
And created new ways of living
And completely healed the earth
Just as they were healed.
Posted by Hollingbourne WI at 07:13

The next 2 months meetings are; 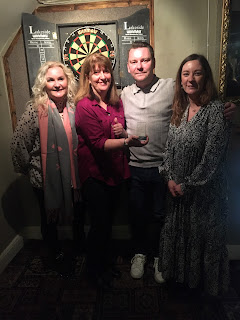 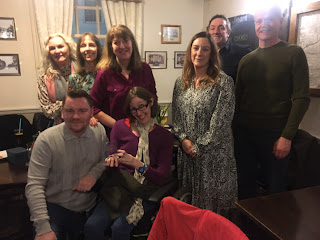 A really enjoyable evening was held at the Sugar Loaves to compete for a Darts Trophy in memory of Christine Rogers. She was the Hollingbourne Darts Team organiser until she sadly lost her battle with cancer last year. Many thanks to Janice for organising such a lovely evening and to all the supporters who came along.Thanks to everyone who contributed to the great buffet spread. All of Christine's family came along. The winner was Sue Roberts pictured above with Christine's children, Karen, Michael and Claire

Posted by Hollingbourne WI at 07:31 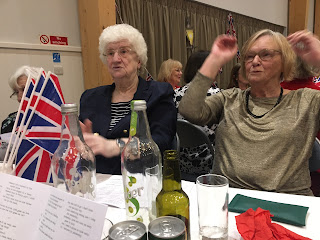 A great night was had by all at the Cockney Sing-A-Long  night. The pie and mash was enjoyed by all. Rita and Janice were clearly having a great time singing along to There'll always be an England.
Posted by Hollingbourne WI at 07:20 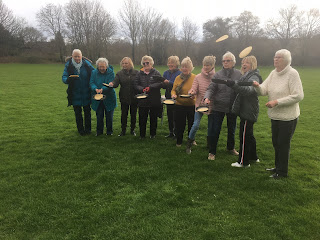 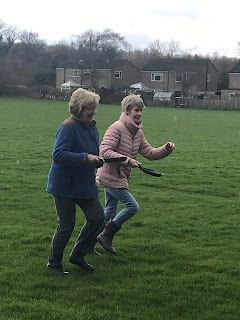 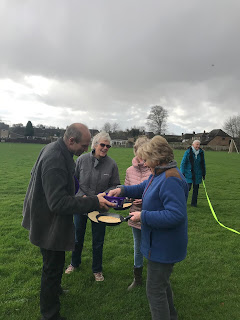 The Pancake Race went really well. Just a short shower to start with and then the sun came out. Thanks to all the helpers who worked really well as a team. It was really good to have our West Kent Chairperson, Jane Backshall, handing out the pancakes, Patrik Garton on the finishing line and thanks to Shellina Prendergast for taking the photographs. A great write up in the KM as well.
Posted by Hollingbourne WI at 07:11

The 11th October 2019 was the 94th anniversary of the first Meeting of Hollingbourne WI. This historic meeting took place in The Institute which was in Eyhorne Street on the site now occupied by The Pavings (a three house development constructed in 1970) next to the old Methodist Chapel, now known as Chapel House. 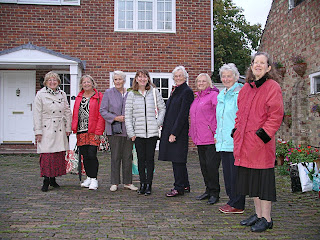 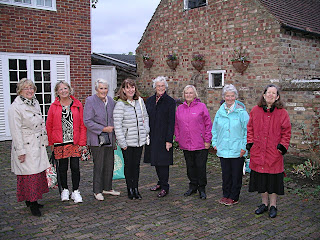 To celebrate the annual occasion the WI met up in the fading light as near to the original site as possible for a photo shoot. 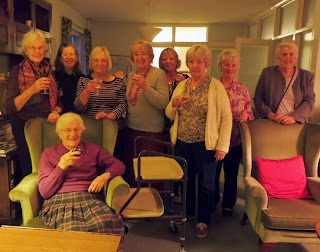 After the photographs everyone headed to Jean Talboys house for refreshments.

Posted by Hollingbourne WI at 02:17 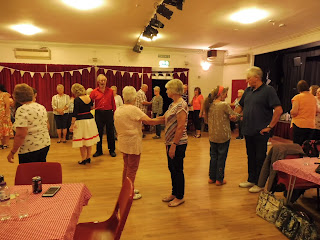 John Sweeney was the caller 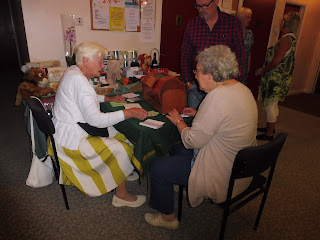 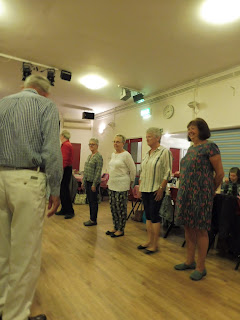 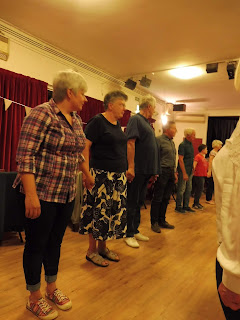 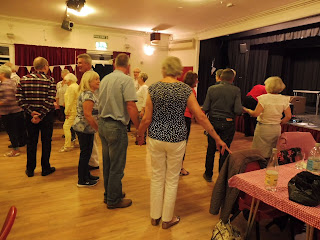 Posted by Hollingbourne WI at 22:55

Our August outing to the Kenward Trust at Yalding

It was a lovely drive through the country on a warm sunny day. We sat outside with a coffee before seeing the alpacas and walking through the nearby wood.  We then went inside the house to enjoy a scrumptious afternoon tea followed by a look through the charity shop for bargains! 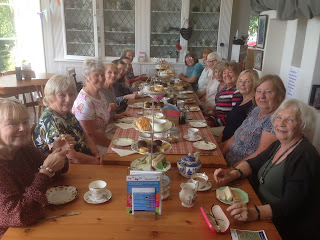 A very pleasant afternoon spent with friends and lots of laughs.

Posted by Hollingbourne WI at 10:25

At our May meeting we first of all discussed the two resolutions which the National Federation of WI’s would put forward to the Government. Sue Roberts guided our consideration of 'Don't Fear the Smear', which was passed unanimously. Hilary gave us an inspiring presentation for the call against the decline in local bus services. She cited the social and independence benefits of using our Number 13 Bus. Again, a unanimous vote which Jane D, as our delegate, took to the NFWI ACM at Bournemouth.

The annual elections for the committee saw Barbara and Sue returned as Joint Presidents (can be seen on the PC website at our stall at the fete). Janice, Mary and Jane O have stepped down, but will be on hand to help with all the projects in which they have previously been involved.

Six of us sang our hearts out with the Hazlitt Choir at the Proms in the Park on 25th May. Rumour has it - the best ever performance yet.

The North Downs District AGM was held in Leeds Village Hall. Eight WIs, and a new WI which has started at 'This Art of Mine' at Hucking, enjoyed hearing about other groups' events and speakers. We are very proud that Penny's flower arrangement, 'A Storm in a Teacup' won the competition. It came complete with lightening and rain!

And the winning continued with Best Dressed Stall at the Fete. Appropriately, given the weather, the 'Hook a Duck' game enjoyed great success. The winner's prize was another Penny special —a 'Hook a Duck' cake, complete with dabbling ducks and waterlilies. Our thanks to the Parish Council for not giving up with the weather.

Latest TV Appearance — you may have seen Mary, Janice, Jane O and me tasting tea on Channel 5's 'Shop Smart Save Money'. Yorkshire tea came out as the most popular, but my money always goes on Pluckley Tea, available at Christopher’s!

Our July meeting is for members only, when we will welcome 2 new members, recruited at the Fete. Was it that hat, Sue?

Posted by Hollingbourne WI at 07:18

When we were formed